LONDON (AFP) — Prime Minister Boris Johnson said Wednesday he could begin to ease Britain’s nationwide coronavirus lockdown next week, but warned he would do nothing to risk a new surge of cases.

Johnson was speaking the day after the country’s official virus death toll overtook Italy’s to become the highest in Europe, with more than 32,000 fatalities related to COVID-19 — behind only the United States in the global tallies.

He said that “every death is a tragedy,” calling the statistics “appalling”, but insisted there was not yet enough data to make reliable international comparisons.

In particular, the British premier said he “bitterly regrets” the deaths in care homes, which stand at more than 6,000. However, he added that there had been a “palpable improvement” in the last few days.

The wider death rate is coming down, six weeks after the government imposed stay-at-home orders to stem the rate of infection. The lockdown measures are up for review on Thursday.

Speaking in parliament for the first time since he himself was hospitalised with coronavirus, Johnson said the government would review the data and he would set out the next steps on Sunday.

“We’ll want if we possibly can to get going with some of these measures on Monday. I think it would be a good thing if people had an idea of what is coming,” he said.

The government has previously stressed the six-week-old measures would only be lifted gradually.

Johnson repeated on Wednesday: “It would be an economic disaster for this country if we were to pursue a relaxation of these measures now in such a way as to trigger a second spike” in infections.

It was the first time Johnson had appeared at his weekly prime minister’s question time (PMQs) in the House of Commons since March 25 — two days later he announced he had tested positive for coronavirus.

The 55-year-old was later admitted to hospital, spending three nights in intensive care.

He returned to work last week, but missed PMQs on April 29 after his partner Carrie Symonds gave birth to their first child together.

The health ministry said Wednesday 30,076 people with coronavirus have died, after announcing another 649 fatalities, with 201,101 positive cases.

However, broader official data released Tuesday put the total number of deaths by late April above 32,000 — including 107 health care workers and 29 care staff.

“Can the prime minister tell us how on earth did it come to this?” Starmer asked in the largely empty chamber, where most MPs participated via videolink.

Johnson replied: “Every death is a tragedy and he’s right to draw attention to the appalling statistics, not just in this country but across the world.”

However, the number of daily tests is currently heading in the other direction, having fallen below 100,000 for the fourth consecutive day since hitting the target — with 69,463 conducted in the most recent 24-hour period counted.

The government is currently trialling a “track-and-trace” system using a dedicated phone app that it hopes will be able to identify localised outbreaks of coronavirus.

Starmer has accused the government of being too slow to respond to the outbreak, but Johnson said his focus now was suppressing the disease.

However, he admitted his own “frustration” about the continued difficulties in getting protective equipment to healthcare staff.

Separately, one of the top scientists advising the government on the coronavirus outbreak resigned on Tuesday after breaking lockdown rules.

Professor Neil Ferguson, an epidemiologist at Imperial College of London, said he had made an “error of judgement” after media reports that he had allowed his married lover to visit him at home. 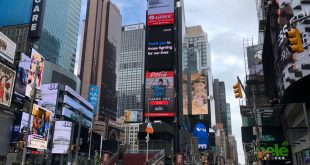