LOS ANGELES, Calif. (AFP) — Another officiating insult was nothing compared to the hand injury to quarterback Drew Brees on Sunday as the New Orleans Saints fell 27-9 to the Los Angeles Rams in an NFL playoff rematch.

Rams quarterback Jared Goff passed for 283 yards and a touchdown and rushed for another TD.

The Los Angeles defense held the Saints without an offensive touchdown in a rematch of last season’s NFC championship game, when a missed pass interference call cost New Orleans a Super Bowl shot.

Brees sat out the rest of the game, and said afterward he’d be seeking further medical guidance.

“I got X-rays. I’m waiting to meet with a specialist,” he said, adding that he wasn’t sure if he’d be playing next week.

Sunday’s game at Los Angeles Memorial Coliseum saw the Saints again come up on the wrong side of a poor call, when Cameron Jordan returned a fumble 80 yards for a touchdown that didn’t count because the play was initially ruled an incomplete pass.

Video review showed Goff had fumbled, but since the whistle had been blown to end the play, the TD didn’t count.

Saints coach Sean Payton was furious, but said later his team’s real problem was 11 penalties that cost them 87 yards and a bevy of missed tackles and other mistakes.

“This’ll be a hard film to watch for guys,” he said.

Brees wasn’t the only Super Bowl-winning quarterback to make an early exit.

Pittsburgh’s Ben Roethlisberger departed with an elbow injury at halftime against the Seattle Seahawks, who departed Pittsburgh with a 28-26 victory.

There were close calls also for the Houston Texans, Indianapolis Colts, Detroit Lions and Chicago Bears.

The Colts edged the Tennessee Titans 19-17 in Nashville and the Lions defeated the Los Angeles Chargers 13-10. The Bears escaped Denver with a 16-14 win over the Broncos thanks to Eddy Pineiro’s 53-yard field goal as time expired.

With controversial receiver Antonio Brown on board, there was no doubt for the Super Bowl champion New England Patriots in Miami.

The Pats, led by superstar quarterback Tom Brady, had lost five of their last six games in Miami, but they crushed the Dolphins 43-0 as Brown caught four passes for 56 yards and a touchdown in his first game for the Super Bowl champions.

The Patriots inked Brown on Monday, after he engineered his departure from the Oakland Raiders but before a civil lawsuit was filed against him by his former trainer accusing him of sexually assaulting her.

There was speculation that Brown would end up sidelined on the NFL commissioner’s exempt list as the league looked into those allegations.

But with no criminal charges pending, Brown was free to play, and the Patriots wasted no time in making use of him.

“I don’t make any of those decisions, so I just show up and do my job,” said Brady, who found Brown with a 20-yard touchdown pass shortly before halftime.

“I was just trying to find the open guy,” said Brady, who threw for two touchdowns to help the Pats improve to 2-0 in the fledgling season.

As in week one, New England’s defense was outstanding, scoring twice on interception returns in the space of two minutes in the fourth quarter.

Miami, who have been out-scored 10-102 in two defeats, pulled quarterback Ryan Fitzpatrick after he surrendered his second pick-six of the contest.

The Dallas Cowboys improved to 2-0 with a second straight win over an NFC East division foe, downing the Redskins 31-21 in Washington. 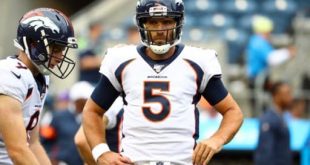 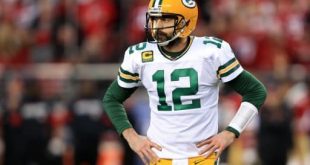 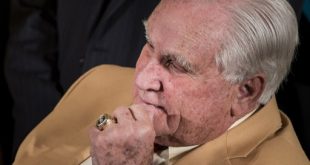